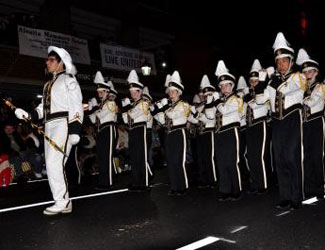 Tickets on sale Wednesday, August 31st at 12 Noon
Ticket Sales are for reserve seating along the parade route for $8/ticket
Box Office will be open the day of the Parade from 10 AM to 2 PM for final sales.

The 95th Annual Alsatia Mummers’ Parade will kick off on Saturday, October 29, 2022 at 6:00 p.m. In the fall of 1921, the subject of Halloween vandalism and mischievous pranksters arose. Alsatia members voiced a concern for it....and hence the Alsatia Mummers’ Parade came to be as a means of attracting people to participate or to be a spectator at the Parade in order to eliminate some of the vandalism and pranks.

After having no Mummers parade for the past two years , this 2022 Alsatia Mummers parade promises to be special. Philadelphia Bands and Drumlines from Baltimore in addition to a few more surprise appearances will add to the excitement of Alsatians gift to the community. And of course, fire trucks, majorettes,floats and many other assorted marching units will fill the air with spirited sounds.

In its early years, the parade was financed entirely by the members of the Alsatia Club. As it grew and became more expensive to produce, the assistance of the City of Hagerstown, the Board of County Commissioners of Washington County, Maryland, Washington County Convention and Visitors Bureau, Washington County Public Schools, the Maryland Theatre, the merchants, manufacturers, business and professional men and women of Washington County have helped make it possible to fulfill the slogan of “Bigger and Better Each Year ".